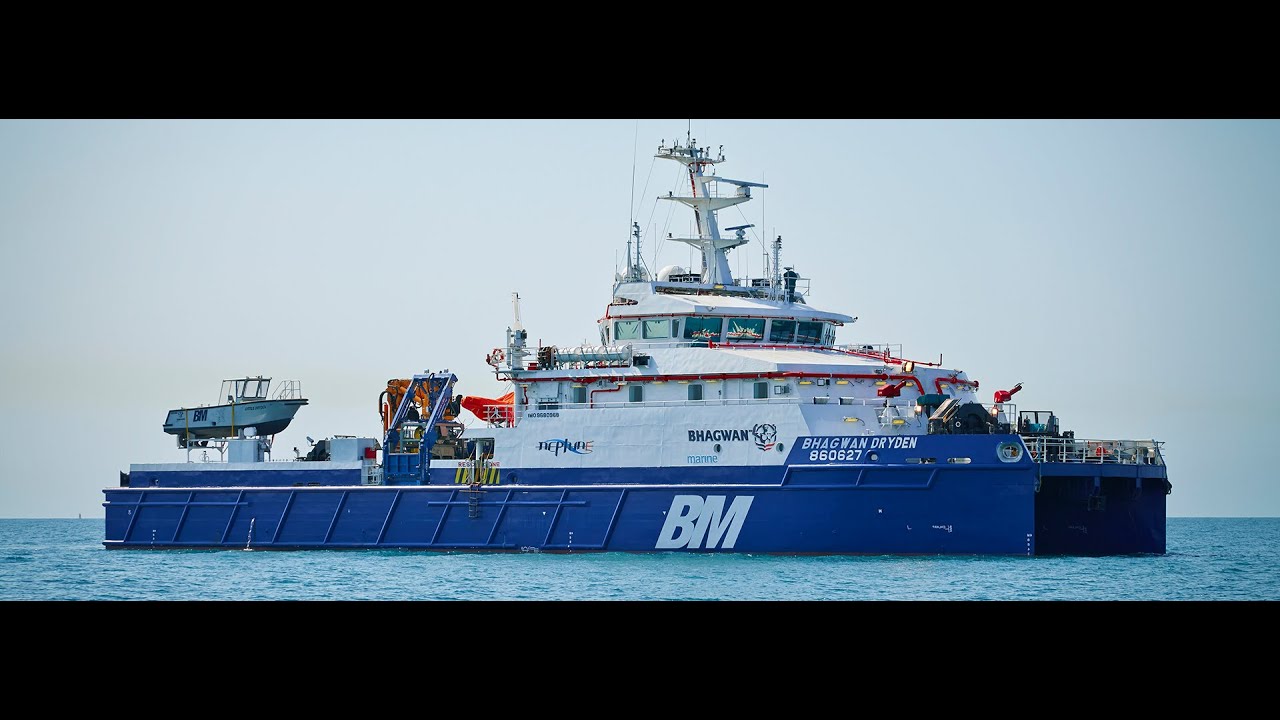 ClickTap to activate the lightbox 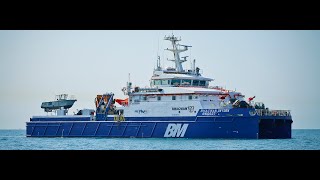 Incat Crowther’s first-of-type Catamaran Dive Support Vessel, Bhagwan Dryden, has set a new standard for catamaran dive support vessels since its launch and delivery earlier this year. Operational feedback has been positive for the vessel, which has already received high praise for initial operations, including mooring inspection carried out by ROV and operations under four point mooring and DP in shallow, rough seas.

Developed in conjunction with Bhagwan Marine and built by Keppel Singmarine, Bhagwan Dryden is the first catamaran dive support vessel (DSV) with such a high level of integrated dive systems.

The vessel has been designed from the keel up to perform six key roles; Dive Support, Geophysical Survey, Geotechnical Survey, Cargo Transport, Hyperbaric Rescue and Safety Standby. The vessel can work in shallow waters, offering operational efficiencies at these depths and is fitted with an ROV, two built in decompression chambers and two Pommec launch and recovery systems, with the diving systems boasting a depth rating of 50m.

With such a varied array of operational roles, unique solutions were required not only in the allocation of spaces, but also with the specification of a flexible, high-redundancy propulsion system.

The result is an advanced propulsion and powering package that integrates a pair of Schottel STP 550 azimuthing stern drives, azimuthing bow thrusters and generators. Bhagwan Dryden is fitted with four generator sets (two Cummins QSK38-M’s and two QSK19-M’s), overseen by an advanced power management system that makes optimal use of the four generators and a battery bank to ensure each power source is used in the most effective way. The battery bank stores enough power to propel the ship for short periods, whilst the generators can be powered up in stages to minimise fuel burn. The system offers both excellent low-speed efficiency (7 knots requires just 25% power) and manoeuvrability and a laden speed of 11 knots.

The Schottel drives combine with a pair of drop-down azimuthing bow thrusters and a Kongsberg control system to give the vessel DPS-2 manoeuvrability. The innovative system lends itself to shallow draft dive operations, as the forward azimuthing thrusters are able to maintain operation as tunnel thrusters when retracted. Further positioning capability is provided by a Sonardyne Ranger 2 USBL acoustic positioning system, which allows the vessel to maintain station relative to undersea reference points.

In addition, Bhagwan Dryden is fitted with a 100-tonne, four-point mooring system featuring four deck winches and diagonally-oriented fairleads on all four corners of the vessel.

Accommodation cabins for a complement of 44 are situated in the hull and the mid deck. The hull also houses laundry facilities and a gymnasium. The mid-deck features an aft-facing survey room, which is linked to the wheelhouse by wireways, allowing operational flexibility.

The main deck of the vessel houses service spaces including an ROV control room and three workshops; as well as crew spaces such as a change room, cinema, dining mess and lounges and a commercial standard galley adjacent to dry and cold food storage spaces.

Incat Crowther is proud to have been chosen to design an Aluminium Patrol Vessel for Queensland’s Department of Environment and Science.

Incat Crowther is pleased to announce the completion and delivery of the Oceanicasub V, the second of a pair of 43m Monohull Subsea Dive Support Vessels (SDSV) constructed by Arpoador Shipyard in Guaruja’, Brazil.